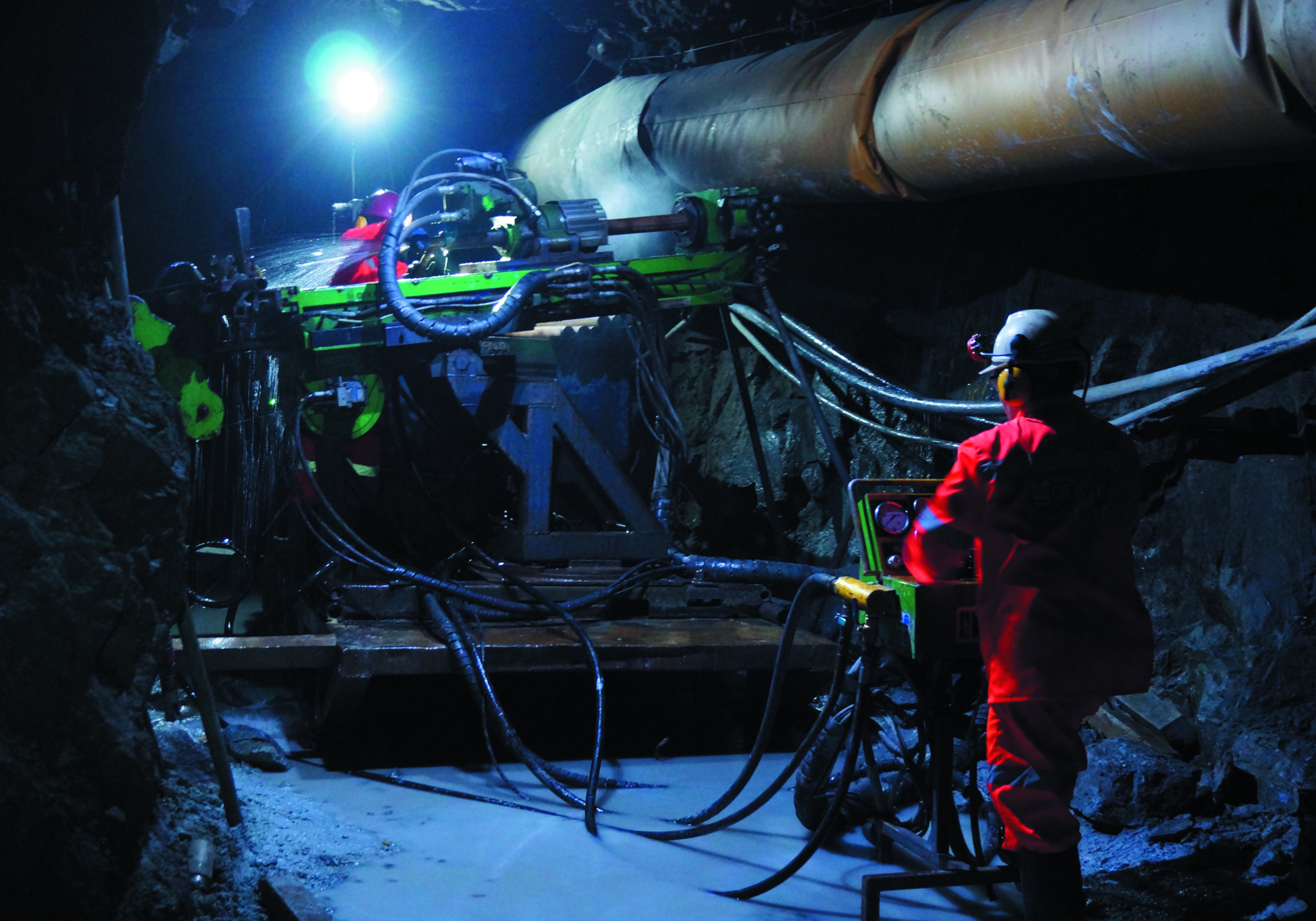 Russian service company OGK Group was established in 2012 following the merger of the leading domestic enterprises in exploration drilling. At that time, the company had 20 employees and two drilling rigs. At first, OGK organized and performed drilling operations in the solid minerals sector, and consistently developed this activity by investing in technical modernization and adhering to high-quality standards.

A careful approach to the business through strict observance of project terms, clear organization of works, and high productivity reflected OGK’s principles and impressed its customers. This led to the company being asked to carry out other work in addition to drilling. New divisions were formed to provide further services for mining companies and today there are four aspects to the business: drilling, blasting operations, mining working, and transportation of rock mass. But drilling is still a core business for the Group.

In the Russian independent services market OGK is the largest company. Revenues totaled USD 77 million at the end of 2018. The company operates in Russia and the Republic of Armenia and employs over 1500 people.

Drilling is our specialization

The Group has specialized in drilling for seven years and has completed more than 50 projects for large mining companies at all stages of operation in the solid minerals sector. In 2018, OGK reached an important milestone in its activities, having performed more than 500 000 linear meters of core drilling across surface and underground mine workings, and more than 1.6 million linear meters of blast hole drilling. The average growth of OGK’s core drilling volumes per year is 15 – 20 %. 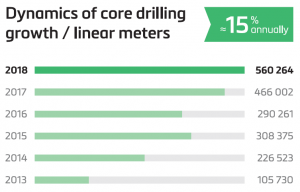 OGK achieves productivity growth year on year owing to its wide range of equipment. The company’s fleet includes 90 units of drilling rigs – the largest among Russian independent drilling companies. We rely on new, up-to-date equipment from the world’s leading manufacturers in this field (Atlas Copco, Boart Longyear, Sandvik). The average age of our equipment is not more than five years. Annual investments in expansion and modernization of the fleet averaged USD 4 – 5 million.
The scope of OGK’s equipment includes drilling rigs with various specifications. In particular, it has machines which are capable of core drilling to a depth of 2000 m (Atlas Copco U8), working with diameters of NQ, HQ, PQ; as well as drilling rigs for exploratory drilling in hard rock (Atlas Copco FlexiROC D60 and D65).
We have some equipment that other exploration and mining companies do not possess. For example, self-propelled small-sized machines for underground core drilling:
the drilling rig ESD 9, which was improved by OGK’s own technical developments. Due to its small size, the rig halves the cost of the construction of drilling chambers for subsoil users increasing productivity, as well as reducing the time required to move the rigs from place to place (dismantling of the machine, loading and transportation operations). Over the past few years, OGK has successfully used these machines at industrial sites for the mining company Nornickel.

Today, mineral resource exploration mining in the world’s toughest terrains poses too great a challenge for the inexperienced. OGK has developed its capabilities over the course of
working on a great number of projects sited in difficult locations. Most of OGK’s open exploration facilities are concentrated in the Far East of Russia – a region where 70 %
of the territory is occupied by taiga forests, dense river networks and poorly developed road infrastructure and 50 % of the territory is also in the Far North. Drilling is performed in permafrost, all year round, including at extremely low temperatures in winter (up to -60°C). Drilling in such conditions is hard. And correspondingly, unfortunately, the cost of work increases. But a careful approach taken by the production team and technical specialists at OGK in the preparation of all projects – proper selection of drilling equipment and drilling fluid composition – allows us to make a competitive offer while still strictly adhering to compliance, guidelines and regulations.

Being a well-established organization of production from scratch in undeveloped exploration areas allows the company to get new projects up and running quickly, as well as to perform drilling year-round.

In the winter of 2015, the company began drilling works at a large gold deposit at Nezhda in the Far North of Russia. The deposit is located in a remote area with sharp mountainous terrain. In just two months, equipment from neighboring regions was mobilized by a winter road; access roads and open drilling sites were prepared, and social infrastructure was built – an inhabited area where a comfortable temperature indoors is maintained despite severe, minus outdoor temperatures (up to -65°C).

At the undeveloped Prognoz field, which is also located in a remote area in the Far North, OGK has been drilling more than 45 000 linear meters per year. Transport connections with the site and delivery of drilling equipment, drilling tools, and goods and materials are only possible using a winter road. However, well-developed logistics allows our drilling crews to perform drilling works regularly throughout the year.

In 2018, more than 90 % of underground exploration drilling carried out by independent Russian drilling companies was performed by OGK. In 2018, 327 915 linear meters were drilled by the Group in underground mining using the core drilling method (58.5 % of the Group’s total core drilling volume for the year).

The Group’s experience in underground drilling is in demand from large Russian gold mining enterprises, which are just starting the underground development of deposits in the Amur region, and not only there. Our production team is involved with Petropavlovsk for underground core drilling at their Pioneer site. Since 2017 OGK has acted as a contractor for Nordgold at the Berezitovy gold mine.

For OGK Group’s production team, drilling is not just a job. We perceive the appointed tasks as a space for professional creativity. In 2018, the company completed a technologically complex project. At a depth of more than 1000 m, our underground  crews drilled geotechnical rising wells with an inclination angle to horizon of up to 87 degrees and extracted oriented core of heavily fractured rock with undamaged structure. The project was carried out at the large underground mines Oktyabrsky and Taimyrsky in the Krasnoyarsk region. The OGK production team developed a technical solution and started drilling. The project was successfully completed within four months, with 2000 linear meters of oriented drilling having been performed.

When working at hazardous underground facilities, OGK carefully monitors safety. An occupational health and safety management program is followed by all subsidiaries.
The system implements risk controls and management standards and is regularly improved upon on the basis of results provided by Russian and international analytics. Each year, OGK organizes training and certification for employee safety, and provides work clothes and individual protection equipment according to industry standards and regulations, as well as guidance materials for injury prevention at production sites. Compliance with safety regulations is carefully monitored by our internal services within the framework of monthly on-site inspections, as well as by the services of customer companies.

The future
As a result of its work, OGK Group has developed a reputation as a reliable partner. The company has taken leading positions in the Russian drilling market in terms of technical equipment and production volumes. The Group is approaching its next stage of development and wishes to expand its co-operation with foreign companies and is ready to offer its resources and experience.