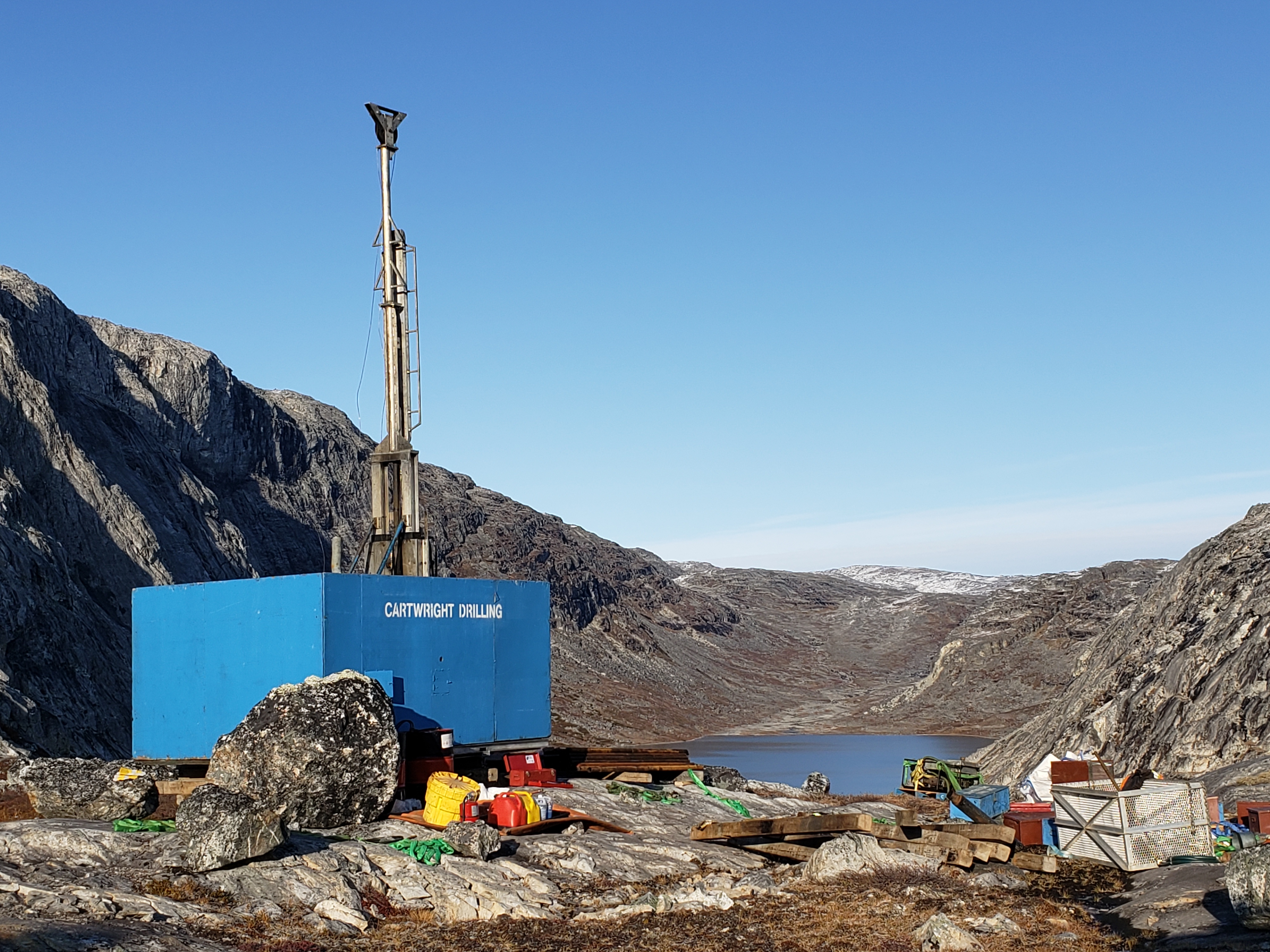 The contract posed a challenge, despite Canadian-based Cartwright Drilling’s 16 years’ experience operating within Greenland’s beautiful yet rugged terrain. It was a mad scramble to load containers in Goose Bay, Labrador in the Province of Newfoundland – Cartwright’s headquarters since its 1995 inception.

This contract took mobilization to a whole new level, as two 20-foot sea containers were trucked 620 km across Labrador, over partially unsealed roads to the Blanc Sablon (Quebec) ferry terminal. The containers were then shipped by ferry to St. Barbe, Newfoundland, before traveling 889 km to the south coast of the island to the Eimskip Shipping Terminal in Argentia. From there, the Pictor J. container vessel transported the equipment from Argentia, NL to Reykjavik, Iceland before transferring to Royal Arctic Lines’ Naja Arctica to continue the final leg of the journey to Greenland’s capital of Nuuk.

Greenland Anorthosite Mining ApS specifically requested the containers unload onto a barge, to deliver the rigs to the general drill area by September 9. The late award date and complicated shipping schedule resulted in the equipment arriving in Nuuk on September 12. To allow for customs clearance, the drill crew were requested to arrive in Nuuk by September 16. They left their Canadian homes on September 15, boarded red-eye flights to Reykjavik, Iceland; where they boarded one more flight to arrive in Nuuk, Greenland mid-afternoon. The crew worked tirelessly to unload the containers and load the barge that same evening. The next day, the crew helicoptered to site to unload the barge and set-up the drill. The program successfully drilled 1509 m (4950 ft) as of October 9, although bad weather delayed demobilization, with the containers being repacked in Nuuk on October 16.

The project was completed in one month, including mobilization and demobilization from Nuuk to and from the remote camp. The team consisted of one foreman, two drillers and two helpers, and they drilled non-stop.

The drilling program’s intent was to confirm the quantity and quality of anorthosite – a material used to manufacture paint, fiberglass and other industrial products. Difficult and rocky terrain called for heliportable drill rig moves.

Bad weather imposed a one-week delay just before demobilization, at the end of a successful three-week drill program. The program commenced favorably with fine weather conditions and production rates of approximately 500 m (1640 ft) per week including moving time. Temperatures were above freezing most of the time, so coil heaters weren’t required to protect the waterlines. The project was an anomaly, in that fuel wasn’t required for water pumping. The resourceful crew found a source that provided gravity flow water to the drill for the project’s duration.

Poor weather forced the crew to travel by boat to Nuuk, and wait for calmer conditions. The team was reduced by one during the wait time, with four crew members remaining to complete demobilization and pack the containers.

Drilling along Greenland’s coastline poses the very real risk of polar bear attacks, as Cartwright Drilling had encountered in the past. Local, experienced hunters were often engaged to protect drill crews around the clock, while helicopters were used to ward off the bears. This project was deemed to be far enough inland for polar bear encounters. Fortunately, there were no sightings.

Challenging conditions called for the crew to utilize the CDI 500 drill rig — a lighter weight, aluminum version of the JKS 300 – designed and built in-house by Cartwright Drilling Inc. in Goose Bay, Labrador. The CDI 500 is capable of drilling 500 m (1640 ft) N-size or 700 m (2296 ft) BTW (B-size Thin Wall). Its light weight deems it relatively easy to handle and move in sections by helicopter, especially when light weight BTW drill rods are used. As with any drill program, minor mechanical issues occurred, yet were quickly resolved by the capable crew.

The drill rig demonstrated ample capacity and was only required to drill up to 143 m (469 ft) in 14 BTW-sized holes,  resulting in an average of approximately 100 m (328 ft) per hole. All holes were completed as per the plan. We thank Anders Norby-Lie, M. Sc., Geology, Director and Project Manager; and Claus Ostergaard, M. Sc. Geology, Director of Greenland Anorthosite Mining ApS for their cooperation throughout the project. We wish them every success with establishing a new mine in Greenland.